A short while ago James Edgar of the Camberwell Press asked me to write a short text in response to one of four conversations recorded for Whatever next: a discourse on typography. Fraser Muggeridge liked it, so I thought I’d put my final draft here. Blame him if you don’t. 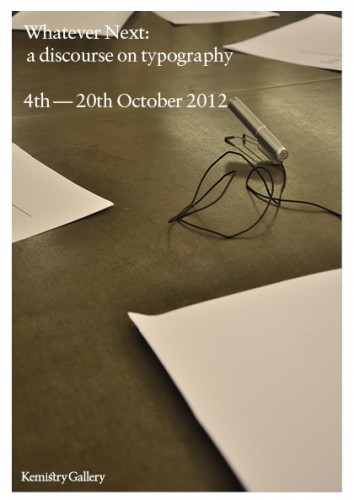 Typeface design has arrived. Emerging from the adolescence of an esoteric field absent from wider narratives of culture, it is maturing into an equally esoteric domain; there, gradually increasing numbers of experts witness an explosion of awareness by the wider population, where words like ‘typeface’ and ‘fonts’ will not cause a conversation to freeze.

I am not exaggerating. We are witnessing a celebrated revival in letterpress; the publication of popular books for those who are beginning to notice fonts on their menus; a growing number of serious magazines and larger publications on type; the transformation of texts on screen with webfonts; and the development of massive typeface families spanning several scripts, for branding and pretty much any device that displays text.

This ambiguous state of hesitantly enthusiastic acknowledgement in the periphery of the mainstream is forcing typeface designers, typographers, and educators to clarify our ideas about our disciplines, and the language we use to describe our contribution (as well as fill out the ‘description of work’ in the next invoice). This is less easy than it sounds: typeface design is a quintessentially interdisciplinary field. The immediate actions of form-making and digital encoding rest on a bedrock of historical and cultural understanding, which is gradually establishing its importance in designers’ minds. Type designers need to have an understanding of writing, be familiar with the developments in the technologies of type-making and typesetting, be aware of how texts are transmitted and shared in each society, and respond to the editorial practices and conventions of each market. Some may even engage with the sprinkling of usability and human perception discourse (although, I would argue, with minimal impact on the quality of their work).

All these caveats may make typeface design appear dry, bereft of the originality in form-making associated with the creative industries. This would be a false interpretation. It is better to put it this way: while the typeface designer needs to be just as creative as the next professional, she also needs to show that history, technology, culture, and society are peering over her head as she sketches or nudges outlines. Indeed, it is exactly this increased expectation of knowledge and understanding that separates typeface design from most disciplines in the creative sector.

This issue is reflected in the discussion in the following pages, as is the imperative to distinguish between ‘typeface design’ and ‘typography’. Indeed, it is not difficult to come up with simple definitions: whereas typeface design refers to the design, testing, and production of useable typeforms in whatever appropriate technology, typography relates to the determination of structure and the specification of appearance at the document level. The scale of perspective is quite different: the typeface designer works at the very limit of shape perception, managing patterns of visual recognition more that individual shapes; and the typographer looks at a the complete document, or even a whole class of documents (in the case of series design, and periodical publications). Furthermore, the relationship of the two disciplines to the content is very different. The typographer reliably knows what texts she is giving form to: the semantic content, style of language, length of text, and density of image support, all are known. On the other hand, the typeface designer can only speculate on the texts her typefaces will transmit, or even the most basic typographic parameters. Ironically, the typographer of periodicals, working with templates to provide for a wide set of possible configurations, may be closer to understanding the exercises in abstraction required in developing a typeface. Reflecting on the work of some of the contributors here, we could even argue that the designer of one-off publications like art catalogues may be closer to a lettering artist than a typeface designer.

And, yet, it would be wrong to take the distinctions too far. Both disciplines can be approached along four axes: at the outset is a brief. (Not just ‘clients’: they may approach the designer with a project, but this must translated into a coherent description of requirements and design parameters. The more experienced the designer, the more she may be expected to contribute to the brief.) Second, is the understanding of the functional aspects of the job, as they arise from a consideration of all those who have a stake in the design. This is user-centred design at its most fundamental: ‘does it work for its intended users, for what it was supposed to do?’ Thirdly, both typeface designers and typographers develop identities: there is a potentially infinite combination of design decisions that deliver a strictly functional product, but which capture the broader semantics? Does the typeface (or the document) acknowledge its genre, and does it reflect its time and place? Does it capture the values inherent in the client’s identity, and explore the potential of stylistic and cultural associations? It is this third dimension that gives a design project relevance and value: the ability of the designer to amplify meaning beyond the functional specifications of the brief, into something wider that engages with peers, and the wider community.

The last axis is the designer herself: the form-giver not just as a social observer, but a social commentator. Moving beyond functionality and usability, the designer employs association, style, identity, differentiation, and beauty to reflect a cultural moment back to its members, and express new ways of looking at ourselves. The most successful designers are the ones who gradually (or, sometimes, abruptly) push the envelope of what we consider acceptable, and reveal to us the patterns of our behaviour.

In these respects, both typeface designers and typographers are equal, and unique: different from the lighter domain of graphic design and many applied arts, exactly because their tasks involve strict functional requirements and a deeper knowledge of their domain. And, still, different from the specificity of the engineering disciplines they may employ: because the real value of typographic work lies in its reading of, and response to, social conditions in a transparent dialogue with peers. The idea of typeface designers and typographers as social scientists may be unfamiliar, but one that we may need to get used to.